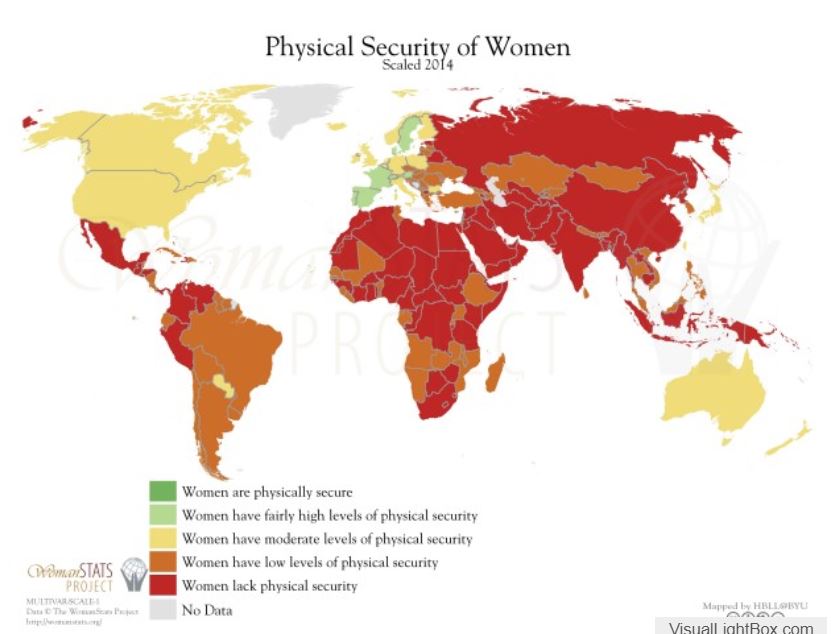 Within the Sustainable Development Goals (SDGs), or Global Goals, Goal 5 is to achieve gender equality and empower all women and girls. For Goal 5, there are nine targets. In this blog, we will focus on SDG5 Target 2: Eliminate all forms of violence against all women and girls in the public and private spheres, including trafficking and sexual and other types of exploitation.

Violence against women and girls is a reality in the United States and in every country around the world. According to the World Health Organization, global estimates indicate that about 1 in 3 (35%) women worldwide have experienced either physical and/or sexual intimate partner violence or non-partner sexual violence in their lifetime. Most is intimate partner violence. Moreover, globally, as many as 38 percent of women who are murdered are killed by a male intimate partner. Other kinds of violence are also widespread. UNICEF found that around 120 million girls worldwide (slightly more than 1 in 10) have experienced forced intercourse or other forced sexual acts at some point in their lives. Also according to UNICEF, 21 million people are victims of human trafficking. 79 percent of human trafficking is sexual exploitation and women and girls are the predominant victims of this crime.

According to OECD data on violence against women, the United States ranks 13th in the world in terms of these crimes, and statistics are similar to global data.   One in three  women have been victims of some form of physical violence by an intimate partner within her lifetime, and one in five women has been raped in her lifetime. From 2009-2013, Child Protective Services agencies substantiated, or found strong evidence to indicate that, 63,000 children a year were victims of sexual abuse. 72 percent of all murder-suicides involve an intimate partner; 94 percent of the victims of these murder suicides are female. (Source) According to the National Human Trafficking Resource Center last year show that more than 4,000 cases of sex trafficking were reported in the U.S. In a 2015 survey, one in three women between the ages of 18-34 has been sexually harassed at work. (Source) Among U.S. female internet users aged 18-24, 26 percent have been stalked online and 25 percent have been sexually harassed. (Source)

Moreover, as the recent #MeToo movement has shown, sexual harassment and even assault, is prevalent in workplaces across the country. An October 2017 ABC News/Washington Post poll found that more than half of all American women (54%) have experienced “unwanted and inappropriate sexual advances” at some point in their lives. Thirty percent of women have endured such behavior from male colleagues and 25 percent identified men with sway over their careers as the culprits. This translates to about 33 million U.S. women being sexually harassed, and 14 million sexually abused, in work-related incidents.

These are sobering statistics, so what has the U.S. government done to eliminate gender-based violence in the U.S. and what current efforts exist?

The Violence Against Women Act (VAWA) (1994) is a critical tool that created a framework to improve criminal justice and community-based responses to domestic violence, dating violence, sexual assault and stalking.  VAWA has provided $1.6 billion toward investigation and prosecution of violent crimes against women, imposed automatic and mandatory restitution on those convicted, and allowed civil redress in cases prosecutors chose to leave unprosecuted. The Act also established the Office on Violence Against Women within the Department of Justice; that position is currently vacant. VAWA was reauthorized, and some of its provisions expanded, by Congress in 2000, 2005 and 2013.

VAWA has made a difference.  Since 1993, domestic violence rates declined 64 percent. And the rate of women being murdered men in single victim/single offender situations — often characteristic of intimate partner violence — dropped by 26 percent over a similar time period, between 1996 and 2012. One study attributed the decline partly to VAWA, which “has been an important impetus for funding in the area of civil legal assistance.” (cut and pasted, needs to be edited) (Source)

The Trafficking Victims Protection Act (TVPA) of 2000 was  the first comprehensive federal law to address trafficking in persons. The law provides a three-pronged approach that includes prevention, protection, and prosecution. The TVPA was reauthorized through the Trafficking Victims Protection Reauthorization Act (TVPRA) of 2003, 2005, 2008, and 2013. There were 4,460 cases of human trafficking reported in 2017 as of June 30. This number is down after a spike in cases reported in 2016 (7,621) of which 84 percent of the victims were female. (Source)

In comparison with other countries around the world, the U.S. domestic violence laws are comprehensive, yet cultural barriers regularly keep women from reporting rape; and human trafficking is illegal but there are enforcement lapses. And while the Obama administration, particularly former Vice President Biden, worked to increase the reporting and response to sexual assault on college campuses, the policy was rescinded and new guidelines were released in the fall of 2017. There are serious concerns that the new rules will weaken sexual violence protections in higher education settings.

As women across the U.S. and across the globe talk more openly about what they have experienced in terms of violence, assault and harassment, it is vitally important that the legal framework  — and more importantly the legal system — keeps up. #MeToo and #TimesUp aren’t just about uncovering what happened in the past and making things right, but creating systems, laws and enforcement mechanisms to stop it in the future.