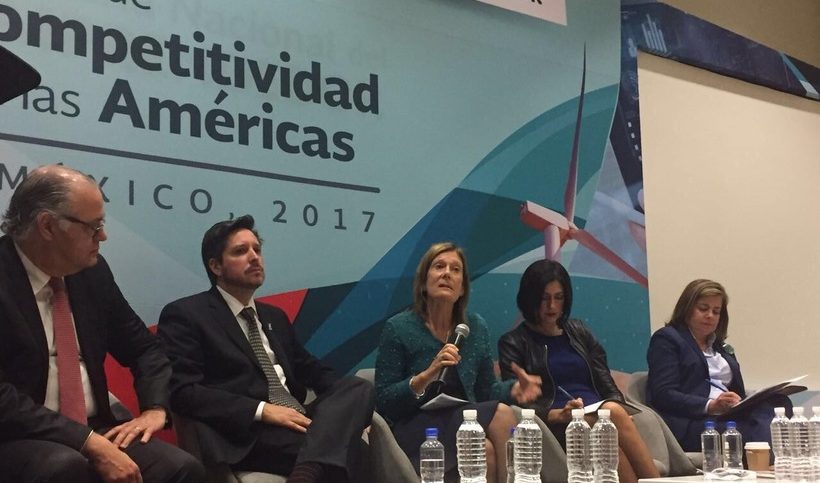 To their detriment, the world’s economies don’t fully utilize women’s talents and skills to drive economic growth and create jobs. If women participated in the labor force at the same rate as men, global GDP could increase from $12 to $28 trillion by 2025. To translate, this is an 11-26 percent increase, which at the highest level is roughly equal to the GDP of the U.S. and China, the world’s largest two economies. Bringing it home, U.S. GDP could increase by five percent.

Last week, I spoke on a panel at the Americas Competitiveness Forum (ACF) in Mexico City. The ACF brings together government officials, private sector leaders, academics and non-governmental advocates from across the Americas to strategize about how to increase growth. The panel focused on how to effectively break down barriers – whether legal or normative – to women’s economic participation.

All the panelists agreed on the need to address these barriers. That alone is progress: the conversation is no longer about why we need policies to support women’s participation in the economy at levels commensurate with their skills, but about what works to get them there.

We addressed what government and the private sector can each do, and the exponential impact when they work together. We discussed concrete recommendations for legal reform, the need for confidence building and skill development for women and girls, the insidious nature of gender bias, and whether quotas for job categories work.

Legal reform is key. According to the World Bank’s Women, Business & the Law Report, 90 percent of countries have at least one law impeding women’s access to jobs and entrepreneurship – some limit the types of jobs women can hold, some the hours we work, some the amount of paid family leave available, and some our ability to borrow money or sign a contract.

We grappled with the negative economic impact of gender based violence (GBV). At least 35 percent of women worldwide have experienced GBV. This is a scourge, as well as a tremendous drag on economic and workplace productivity. The U.S. loses $1.8 billion in productivity annually, and 8 million days of paid work due to GBV. Ensuring that women have economic opportunity is fundamental; but, if we don’t pass and implement laws to counter GBV, we won’t make the progress we need.

Here are some takeaways:

1) Working together, government and business can accelerate women’s economic participation. For example, government can remove legal barriers to women’s access to financial services, like requiring a husband’s signature for a business loan. Banks can support creative ways for women to bank, including mobile technology and mobile bankers, where women at marketplaces can bank on the spot. Taken together, these reforms make it easier for women to start businesses and safely save their proceeds.

2) Leading by example is important. Governments and businesses can procure goods and services from women-owned enterprises. Both can commit to considering women for promotion to senior management in equal numbers, providing child care at the workplace, and examining and addressing pay gaps. For example, in 2015, Salesforce reviewed its salary structure, and if unexplained differences in pay popped up by gender, made salary adjustments. These steps are not just good practice, but effective tools to recruit talented workers – both men and women.

3) Harnessing interest in women’s economic empowerment can start a conversation about other issues that hold women and girls back. Every country and community wants more jobs and more prosperity. We can use this imperative to raise other issues like the need to address GBV, and the need for girls to complete their educations and learn much needed job skills.

4) Investing in girls and young women is transformative. This is true whether we ensure that girls have equal access to education, or are exposed to the broad range of economic opportunities. Every additional year of a girl’s education increases her wage potential by 12 percent. While in Mexico City, I was heartened by an event taking place alongside ACF. There were literally thousands of young women and men thronging the convention hall, jostling each other for the best seats, and lining up to hear speakers from Mexico and beyond. The topic wasn’t sports, music, or the latest video game – it was entrepreneurship. We need to capture this enthusiasm from young women especially and keep it going.