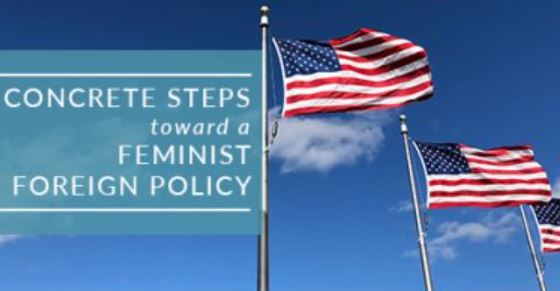 In order to increase the prospects for peace, stability, and security, and to demonstrate American leadership and commitment to human rights, foreign policy must integrate the goal of gender equality into national security strategies and approaches. The principles of women’s rights, human security, and cooperation, and the need for the actions of the U.S. government to be aligned domestically and around the world are central to a feminist approach to foreign policy. This paper seeks to do one thing: to make recommendations about how a feminist foreign policy could be operationalized within the institutions and policy-making processes of the U.S. government, through the implementation of existing policy and legislation, most notably the Women, Peace and Security Act of 2017 (WPS Act). Feminist foreign policy can also be furthered with new policy and legislation.

The Women, Peace and Security policy framework and its implementation globally over the last 20 years are key drivers of any feminist foreign policy, as witnessed by the origination and development of feminist foreign policy agendas in other countries. This policy framework builds on earlier human rights and women’s movements as well as the Beijing Declaration and Platform for Action. It widens the aperture beyond conflict prevention and resolution and supports a “rebalancing” of our approach to global engagement, so that the full range of diplomatic, development, and defense strategies are used to meet U.S. goals and objectives. Women, Peace and Security is a feminist approach to foreign policy because it broadens the definition of security to include human security and address overarching issues such as global health, climate change, and food security.

Since the adoption of UN Security Council Resolution 1325 in 2000, the Women, Peace and Security agenda has challenged gendered assumptions about power and conflict resolution. These assumptions include the belief that the use of military force, or hard power, alone makes us more secure than the use of diplomacy, development, and other levers of soft power; and that human dimensions of security are less critical than geopolitics, which should mostly guide foreign policy and national security decisions. The Women, Peace and Security agenda and feminist lens on foreign policy fundamentally question these assumptions.

The recommendations made here for instituting a feminist foreign policy in the U.S. and fully implementing the Women, Peace and Security agenda are not possible without strong leadership and political will.

To better advance U.S. national security objectives and to ensure lasting change, a focus on gender equality must be integrated into a broader approach to foreign policy, with regular senior-level attention and the capacity to coordinate different parts of the government with relevant areas of responsibility. As mentioned previously, these recommendations align with feminist approaches to foreign policy and international development agendas of other countries including Sweden, Norway, Canada, France, Luxembourg, and Mexico.

The full paper can be found on the Our Secure Future website HERE.